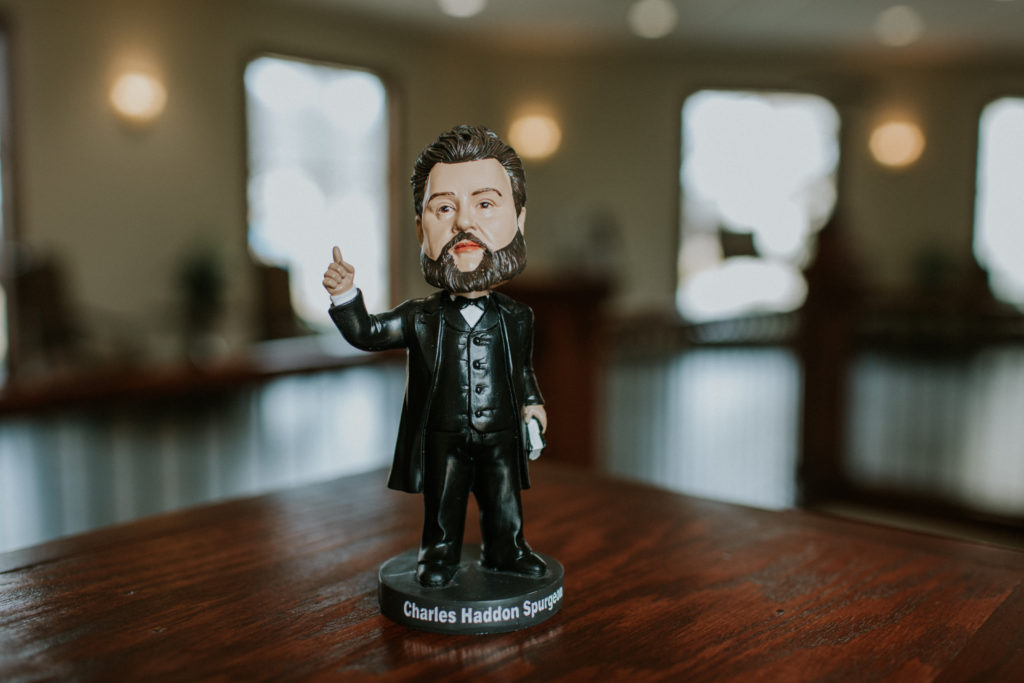 Who is Charles Haddon Spurgeon? Known as the “Prince of Preachers,” this Victorian, Calvinistic, Baptist minister testified as a powerful gospel witness in his time, but his influence endures today. So much so that Carl F. H. Henry, the dean of twentieth-century evangelical theologians, once called Spurgeon “one of evangelical Christianity’s immortals.”

But what makes Spurgeon immortal? Whether you are new to Spurgeon, or a familiar friend, here are a few things you should know about Charles Haddon Spurgeon.

Born on June 19th, 1834, in Kelvedon, Essex, to John and Eliza Spurgeon, he was the firstborn of seventeen children, although unfortunately only eight survived adolescence. A boy who loved books, he quickly became fascinated with John Bunyan’s Pilgrim’s Progress. However, Charles did not lose his own burden at the foot of the cross until January 6th, 1850. That morning a roaring blizzard forced Charles into the first church he could find, the Primitive Methodist Chapel on Artillery Street in Colchester, England. There Charles heard a sermon delivered by a man who was in his words, “really stupid” and who could “not even pronounce the words rightly.” Yet, by God’s grace Charles “looked to Christ” and was saved. Soon thereafter he moved to Cambridge, joined St. Andrews Street Baptist Church, and began his ministry as an itinerant preacher. In October of 1851 Charles was called to preach in first church, Waterbeach Chapel, and soon thereafter accepted the pastorate of New Park Street Chapel in Southwark, London in April of 1854. In 1861 the Metropolitan Tabernacle opened and his ministry exploded resulting in the founding of 66 parachurch ministries. His remarkable ministry in London would last 38 years before his death on January 31st, 1892 in Menton, France.

Charles lived during the Victorian age where “progress” was the prized virtue of the day. Born in the country, when the nineteen-year-old moved to London in 1854 he was entering the largest and most powerful city in the world. However, in London he found himself on the south side of the river, in Southwark borough. According to Helen Douglas-Irvine’s work, History of London, Southwark enjoyed “the infamous distinction of a pre-eminently evil reputation” and a “meanness which proceeds from extreme poverty and decay.” To complicate matters when Charles arrived at New Park Street Chapel the dwindling congregation could not pay him a regular salary, rather he was paid by the fluctuating and meagre seat rent. When the congregation – and the giving! – revived after three months of his ministry, he declared, “I will pay for the cleaning and lighting myself.” And from that day he covered all the incidental expenses of New Park Street Chapel and the Metropolitan Tabernacle to his death. But Charles Spurgeon did more than cover the “incidentals.” By the age of 27 the young pastor had donated approximately $1,325,378 of the required $3,690,282 toward the construction of the Metropolitan Tabernacle. He earned this money from speaking fees and from the sale of his wildly popular sermons and books. He didn’t even take a salary from his new megachurch.

Charles Spurgeon was a truly unique instrument of the Lord Jesus Christ. One of the most remarkable aspects of his life and legacy is that he holistically exemplified Christian virtue in his ministry. With respect to evangelistic zeal, Charles’ passion for evangelism is seen in every Christ-centered facet of his life, ministry, and sermons. During his lifetime he preached the gospel to over a million people and personally baptized 15,000 new believers converted under his ministry. Furthermore, his sermons were translated into nearly forty languages including; Arabic, Armenian, Bengali, Bulgarian, Castilian, Chinese, Congolese, Czech, Dutch, Estonian, French, Gaelic, German, Hindi, Russian, Serbian, Syriac, Tamil, Telugu, Urdu, and Welsh.

Called a “nine-days wonder” by The Sheffield and Rotherham Independent, this “boy preacher of the fens” took the world by storm when he arrived in London in 1854. The young preacher was a force to be reckoned with and provoked polarized reactions. The Ipswich Express said that his sermons were “redolent of bad taste” and “vulgar and theatrical.” On the other hand, Elymas L. Magoon – his first biographer – said that when Charles arrived in London, “A burning and shining light has suddenly burst upon the moral world.” His voice was “full, sweet, and musical,” and the massive crowds that Spurgeon drew by open air preaching led Magoon to title his biography of Spurgeon The Modern Whitfield.

But how was Charles viewed by the people, the “least of these” whom he ministered to in his blighted community? In 1855 one anonymous writer, Vox Populi, the “voice of the people,” wrote that, “Mr. Spurgeon institutes a new era, or more correctly revives the good old style of Bunyan, Wesley, and Whitefield, – men whose burning eloquence carried conviction to the hearts of their hearers, – men who cared naught for the applause of their fellow-mortals, but did all for God’s glory.” Indeed, Charles gave fresh voice the stream of rich theology which flowed through Calvin, Owen, Bunyan, Edwards, Wesley, and Whitefield. He knew that Christ had not commanded him to “feed my giraffes,” but rather to “feed my sheep.” Thus, in preaching he insisted that, “We must not put the fodder on a high rack by our fine language, but use great plainness of speech.” And Charles did speak plainly and often upon his favorite theme, “Jesus Christ and him crucified.” Indeed, it is for his richly theological, exceptionally vivid, and dogmatically christocentric preaching for which Charles Spurgeon is known.

But Charles was not just a preacher – he was also a College President. In 1856 he founded the Pastors’ College, a free seminary designed to help “rough and ready” minsters sharpen their skills for the ministry. Within the first twenty years of operation his students planted 53 new Baptist churches in London, not counting missions around the world or across England. But, Charles also serves as an example of theological integrity. Near the end of his life, in 1887, the Downgrade Controversy erupted as the theological decay of Britain was exposed. At that time many had abandoned the authority, inspiration, and inerrancy of the Scriptures, and furthermore, others began to reject the bodily resurrection of Jesus Christ. He saw this decay in the Baptist Union and called for a direct response – the drafting of an evangelical statement of faith. However, his call was not heeded, nor was a statement drafted. In the end Charles submitted his letter of resignation to the Baptist Union on October 28th, 1887, only to find himself censured by the same body a few months later. Prophetically, he said, “I am quite willing to be eaten of dogs for the next 50 years; but the more distant future shall vindicate me.” And today his prophecy rings true.

Finally, Charles Spurgeon exemplified the Christian virtue which David Bebbington has termed “activism”, the passionate belief that the gospel must be expressed in action. In addition to the Pastors’ College, he also founded a ministry to prostitutes, a ministry to policemen, two orphanages, and seventeen almshouses for widows.  Research conducted at The Spurgeon Library has shown that a conservative estimate of his net worth ran about $50 million, and yet when he died only about $250,000 was left in his bank account. What does one do with $49,750,000? For Charles Spurgeon the answer was simple; invest it in God’s Kingdom. Orphans had to be fed, the houses of widows subsidized, and the Home Rescue Society for women suffering from domestic abuse had to be funded somehow.

Anyone of these qualities; evangelistic zeal, theological integrity, or evangelical activism would have been sufficient to earn Charles recognition as an exemplary Christian man. Yet, God was pleased to work all these things through his chronically depressed, arthritic, and gout smitten servant Charles Haddon Spurgeon. It was not Spurgeon who made Spurgeon great, it was God who made Spurgeon great, or rather, God who magnified his greatness through Spurgeon’s weakness. In Spurgeon’s words it was “all of grace.” Faithfulness to the Lord Jesus Christ above all other things was the chief goal.

If you visit The Spurgeon Library you will see two frosted glass seals on the main doors. On the left, the seal for Midwestern Baptist Theological Seminary, but on the right, the seal for The Spurgeon Library, a silhouette of Spurgeon’s face. The frosted glass was chosen with one specific purpose in mind, to remind us not to look to Spurgeon, but rather through him. To look through him and to see Jesus Christ. To see Jesus Christ as worthy of all glory, honor, excellence in service, and missionary zeal. Thus, the goal of The Spurgeon Library is to steward the life, legacy, and resources of Charles Haddon Spurgeon so that others see and savor Christ. Indeed, to be for the Church, for the Kingdom, and for Jesus Christ.